1. Is DMP a proportional electoral system?

Yes. DMP is a fully proportional electoral system. That means if Party A receives 40% of the vote, it will receive approximately 40% of the seats.

2. Does DMP require a complicated ballot?

No. In fact, DMP uses the simplest ballot structure of the proportional systems that have been recommended for use in Canada. Below is a sample DMP ballot. 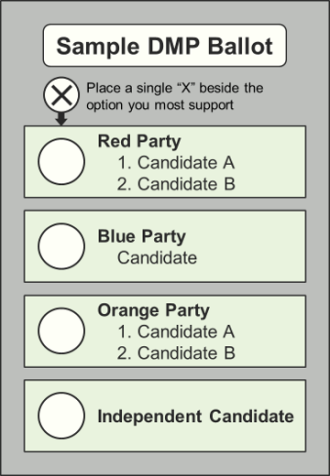 As the above image shows, the ballot used by DMP is almost identical to that currently used in Canada. The only difference is that parties can choose to list up to two candidates.

To understand how this ballot design works with DMP, let’s look at two examples. First, assume that the Red Party places first in the district. This would result in the election of the first listed candidate for the Red Party, Candidate A. Candidate B for the Red Party would then be considered for the second seat in this district.

3. Why would a party choose to nominate only one candidate in a district?

The second listed candidate for a party only has an opportunity to win a seat if their party places first in their district. Therefore, if a party knows that it has no chance of placing first in a district, it can choose to focus its resources on nominating and supporting one, rather than two, candidates.

5. Is my vote wasted if the party I support doesn’t elect a candidate in my district?

No. The number of seats awarded to each party is based on the regional vote. Therefore, if one’s chosen party isn’t elected locally, their vote will still factor in to the regional allocation of seats.

6. Since DMP uses two-member districts, would it double the number of elected politicians?

No. Existing districts would be merged so that the number of representatives wouldn’t change.

Of course, this means that districts would, on average, double in size. For rural districts that are already extremely large, like Fort McMurray-Cold Lake, there will be sufficient flexibility to prevent these districts from significantly increasing in size.

Finally, it should be pointed out that, despite the fact that districts would be larger, citizen access to elected representatives would actually be better than under our current voting system. That’s because the citizen to representative ratio would remain the same, but, in most cases, people would have representatives from two different parties to approach with their concerns.

7. Would representatives remain accountable to their local constituents?

Yes. All representatives would be responsible for representing the district in which they were elected and would rely on the support of their local constituents to be re-elected.

8. How does DMP choose the winning candidates?

The first seat in each district is filled by the candidate with the most votes, exactly the same as in the current system. The remaining seats, called second seats, are filled to accomplish region wide proportionality. Each party is assigned their deserved number of second seats where they have their strongest levels of local support. For more details on this process, see the “How it Works” page.

9. What happens if a by-election is needed?

By-elections would be decided by plurality rather than the proportional algorithm used by DMP.

10. Would rural areas have less say in who represents their districts than more populous urban areas?

No. All districts would have an equal say in the process of determining which candidates represent them.